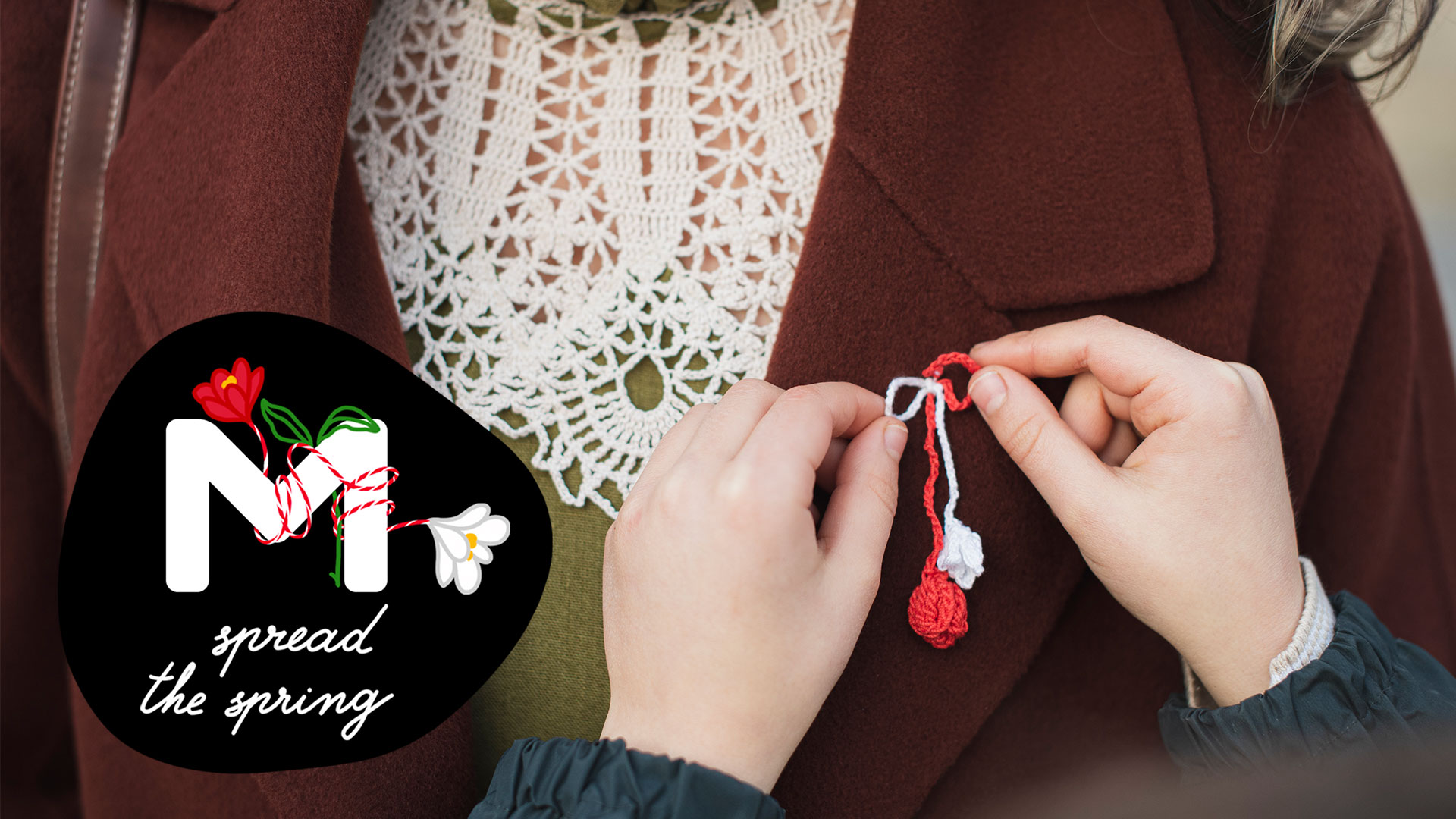 Every year, on the first of March, regardless of whether it is sunny, raining or snowing, Mărțișoare (plural) appear on the streets, in buses, in classrooms and in each corner of the Republic of Moldova. Mărțișoare are amulets obtained by weaving two white and red threads, of wool, cotton, or silk, that protect us from bad omens and announce the coming of spring. Mărțișoare are gifted to loved ones, pinned on clothes close to the heart, worn around the wrist, or around the neck, to bring good luck and safety.

The symbol marks the transition from winter to summer and can be found in various forms throughout the geographical area between the Republic of Moldova and Northern Macedonia. One of the legends associated with Mărțișor tells us how on the first day of March, Spring was walking through the forest and saw a blooming snowdrop in the snow. Spring started uncovering the snowdrop. Winter got angry and sent a very cold wind that froze the snowdrop. Spring covered it with her hands to keep it warm and stung her finger in some thorns. A drop of blood ran over the snow, melted it, and the snowdrop revived. This is how Spring wins the battle with Winter every year, the victory is celebrated by weaving the two colors of white and red together.

The legend appeared in the 18th century, but the customs behind it are much older. The Mărțișor is believed to have existed for over two thousand years, and in 2017, following a joint effort from the Republic of Moldova, Romania, Bulgaria, and Northern Macedonia, it was included in the UNESCO Representative List of the Intangible Cultural Heritage of Humanity.

From ancient times, in the geographical area where the Republic of Moldova and Romania are now located, a ritual of purification has been taking place on the first day of March. The household is cleaned all over, through this process the Winter evil is banished, and Spring is invited with its goodness and warmth. The making of Mărțișoare during winter, pinning them close to the heart on the first day of March and wearing them for a month, represents a simplified ritual of the transition from winter to summer. Gifting Mărțișoare to those close to you emphasizes the spirit of a united, supportive community, which celebrates the coming of spring together.

The interweave of white and red threads provides protection especially for children or baby animals, which with the arrival of spring begin to communicate with the sun and get to know the nature around them. In cities we see Mărțișoare pinned on people’s chests, while in villages we can also see animals wearing Mărțișoare around their necks, thus being protected from bad omens. The custom states that at the end of March, the Mărțișor must be tied to a fruit tree twig. In this way we charge it with our energy. The tree will bear big and sweet fruits thanks to the Mărțișor that we gifted. This completes the ritual of giving back to nature the warmth that we received from it.

Since 1968, in Chisinau, the capital of the Republic of Moldova, the Ministry of Culture organizes an international music festival – Mărțișor – which aims to promote this symbol of solidarity of the community and a mutually beneficial relationship with nature.

The Mărțișor has survived for over two thousand years because it intertwines with nature, is magically wrapped, knows how to adapt, and takes on new meanings with each generation. In 2022, the Ministry of Culture together with the National Inbound Tourism Association of Moldova made a short video that conveys what weaving a white thread and red thread together means today. We invite you to get acquainted with the protagonists of the video and the significance of Mărțișor for them. 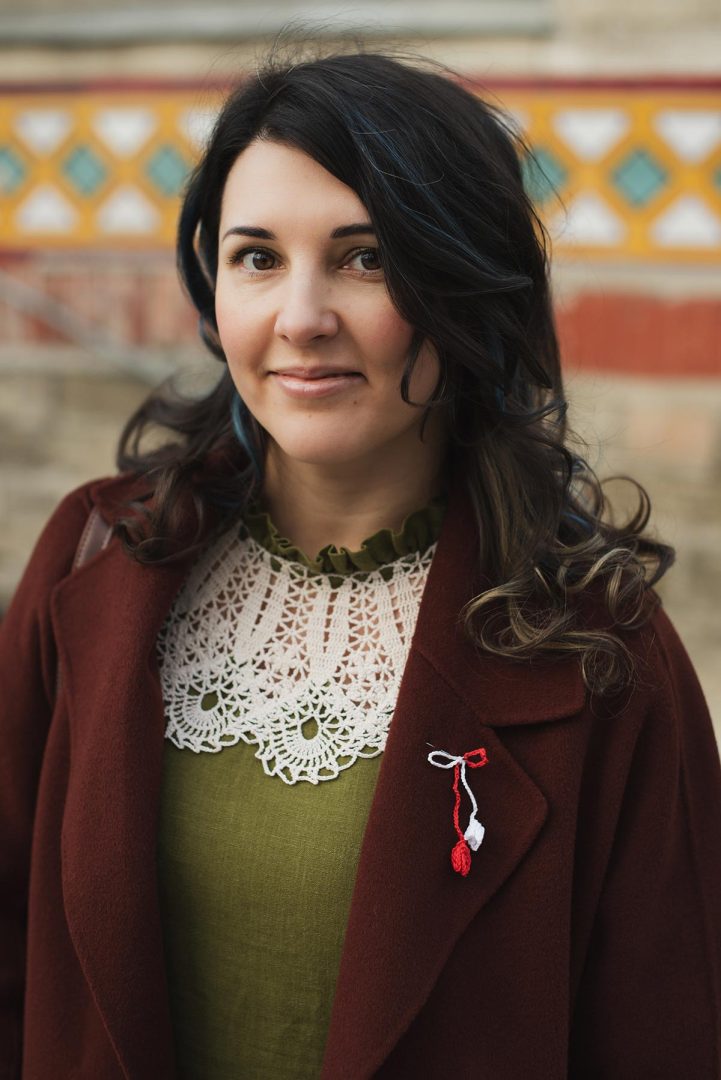 Singer, we took her photo and talked about Mărțișor in the Dendrarium Park in Chisinau, where at the end of March you can see trees decorated with white-red threads by the visitors.

Wearing a Mărțișor I feel like I’m part of nature and I contribute to the coming of spring. When I was little, I was making them together with my dad. It happened for me to lose my Mărțișor, and I took it as a sign of misfortune, it felt like losing spring. My grandmother told me the legend of the Mărțișor and for me it was very important to carry this piece of magic with me, and at the end of March to tie it to a tree and make a wish.
Stories intertwined with traditions seem invaluable to me, they are so powerful that they manage to reach us after hundreds of years. We need to clothe our souls with stories and magic. People need the Mărțișor, it’s a thread we hang by. 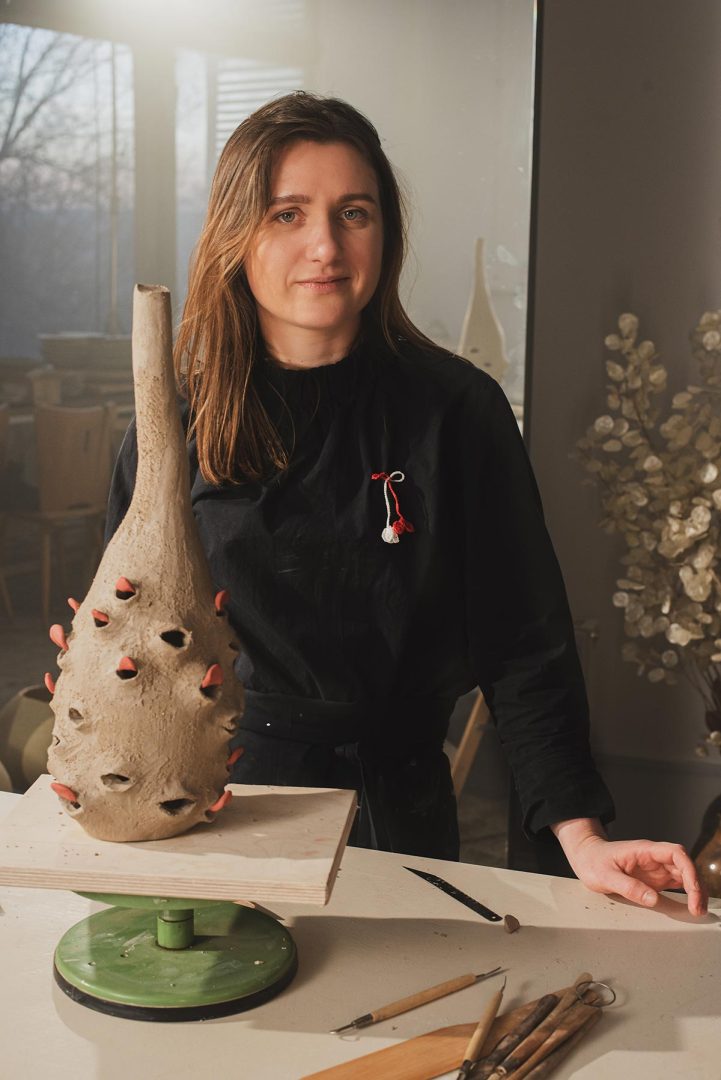 Ceramist, we found her in her workshop, working on a red and white sculpture.

Once, on the first of March, as I did every year, I shared Mărțișoare with my closest friends. One of the girls tied her Mărțișor to a tulip, as she had recently received a large bouquet of tulips. From that bouquet, one by one, the flowers withered, so that in the end, the only the tulip that was still alive, was the one tied with the Mărțișor. This phenomenon may have a scientific explanation, but for me it will always be a magical moment that further strengthens the status of Mărțișor as a herald of spring and the return of nature to life. 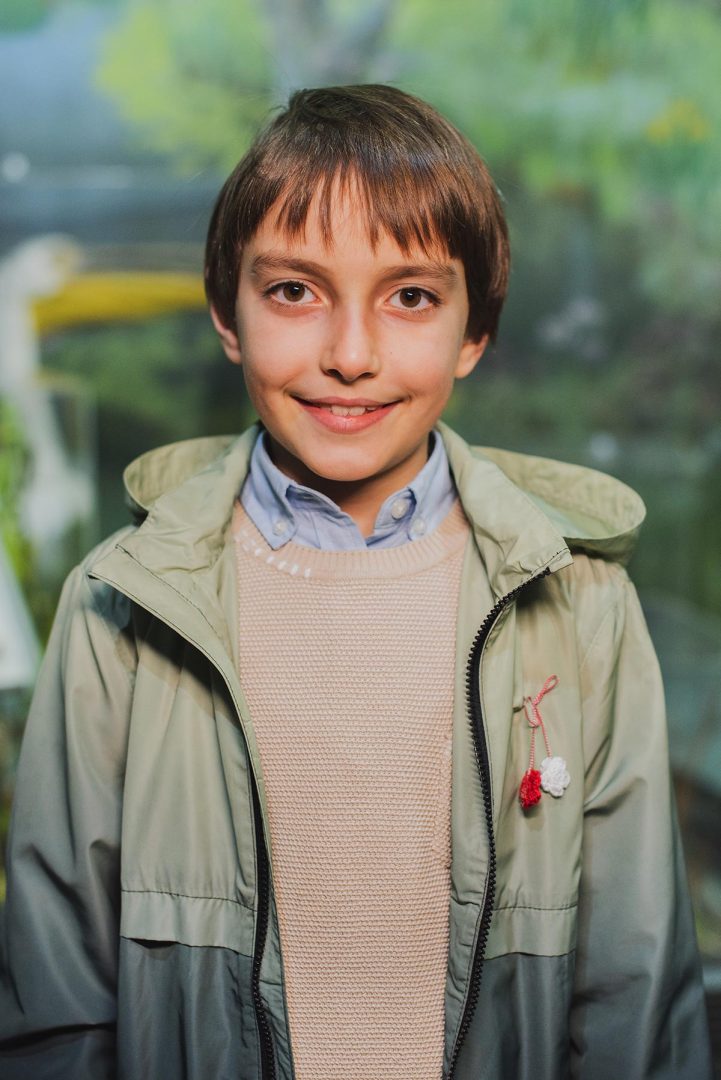 Eight years old, he participated in a Mărțișoare making workshop at the Ethnography and Natural History National Museum.

The Mărțișor is an object of love and is very, very cute. When I gift it, I feel like I’m doing a good thing. I wish I could gift Mărțișoare to fish, especially because they come close to the shore to lay eggs in early spring. I would like to discover a new species of fish, it would be called Peşteleu (Lion Fish). And it would wear Mărțișor all through March.

Ethnographer at the Ethnography and Natural History National Museum, we followed her while she shared the secrets of making Mărțișoare with Leo and other children.

The Mărțișor is a custom that has lasted over two thousand years, even if it is made of thread, which is not very durable. Culture, however, has a memory of its own.

We make Mărțișoare because we want to live this threshold of time. Through the tradition of Mărțișor, the society solves problems related to its unity, and the articulation of certain relations. Many customs have disappeared in the past, but the Mărțișor remains actual, current, it goes on. The Mărțișor is open to all cultures, open to those who want to use it as a language of communication, of understanding. After feeling the power of Mărțișor, everyone starts to wish for it. The Mărțișor can unite the world. 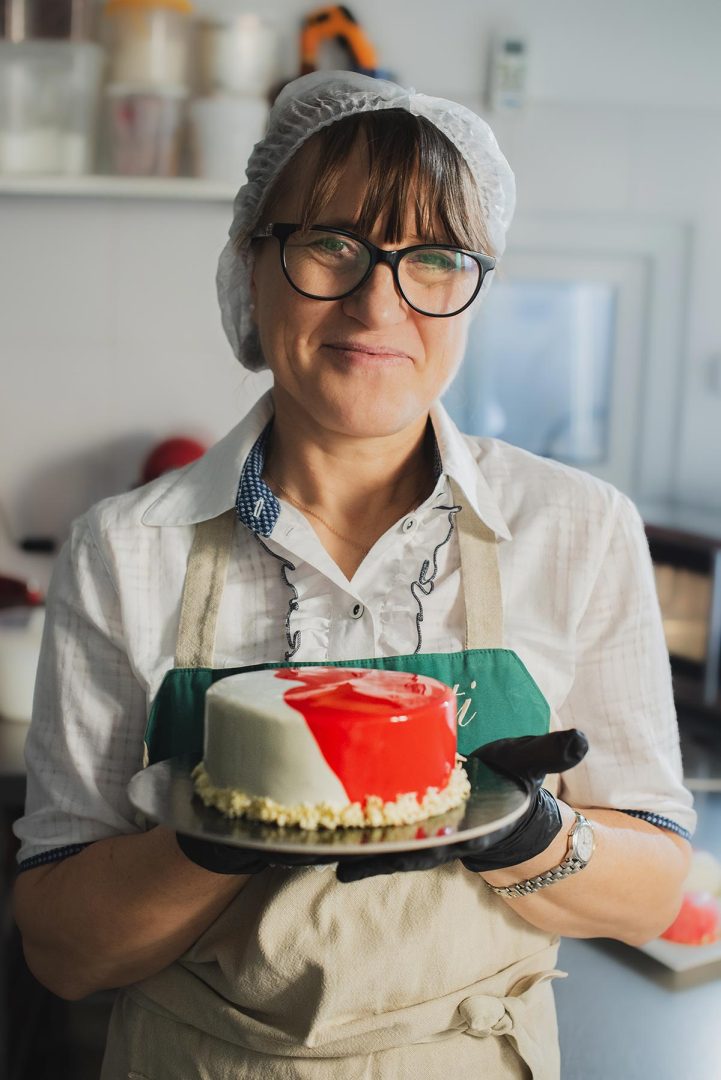 Pastry chef and we caught her in action, in the kitchen of Bunătăți de la Marika, while she was cooking a cake with white and red icing.

Mărțișor is the spring holiday I am always waiting for. When I was little, I used to make Mărțișoare for my loved ones together with my mother and sister. The whole month of February, I would sit down with other girls from the neighborhood, make Mărțișoare, weave carpets, talk, giggle, and sing by the fireplace, with the gas lamp on. I would love to organize such a sitting in 2022.

Since I started being working as a pastry chef, every year in February, or at the beginning of March, I always invent some new recipe in the kitchen. It’s something that comes organically. I feel the need of trying different ingredients and methods. In cakes, as in Mărțișor, there is a combination of two colors, two tastes, sweet and sour, this creates a balance, but also a contrast between two reactions. Spring is an impetus to change something, to innovate, it is when the window of creativity opens. Tomorrow I’m experimenting with a new a pistachio cake. Pistacchioso! I invite you to see what comes out of it.

Painter, he has a workshop in the attic, and we caught him painting Spring at the beginning of March - dressed in white, surrounded by red birds.

Mărțișor is the event in which everyone rejoices together that spring is coming. When I gift a Mărțișor, I share this joy. When I receive a Mărțișor, I remember my childhood. I see the snow melting and streams starting to flow along the side of the road. When I was eight or nine years old, I usually had two or three nuts with me, I would break them in half, take out the core and make little ships. Sometimes I would stick a piece of cloth inside, so it has a sail, and I expected it to go far, far away. On the street there were canyons of ice, and the little ships took different courses. Iceberg blockages appeared, I watched the ships topple, recover, and move down the stream. One day I had a lot more than three nuts. I watched them sailing on the water all day long. I came home, late and with my clothes soaking wet, mum was very worried and asked me where had I been all day, she had looked for me on the streets for several hours.

When I grew up, and was about eleven years old, preparations for the first of March begun in the beginning of February. I used to make many Mărțișoare for girls. I liked it a lot, so I worked all month on very sophisticated Mărțișoare. The more I liked a girl, the more sophisticated the Mărțișor was. I didn’t always get back a Mărțișor from the girl I liked most, so I started liking a different girl more, one that has also gifted a Mărțișor to me. 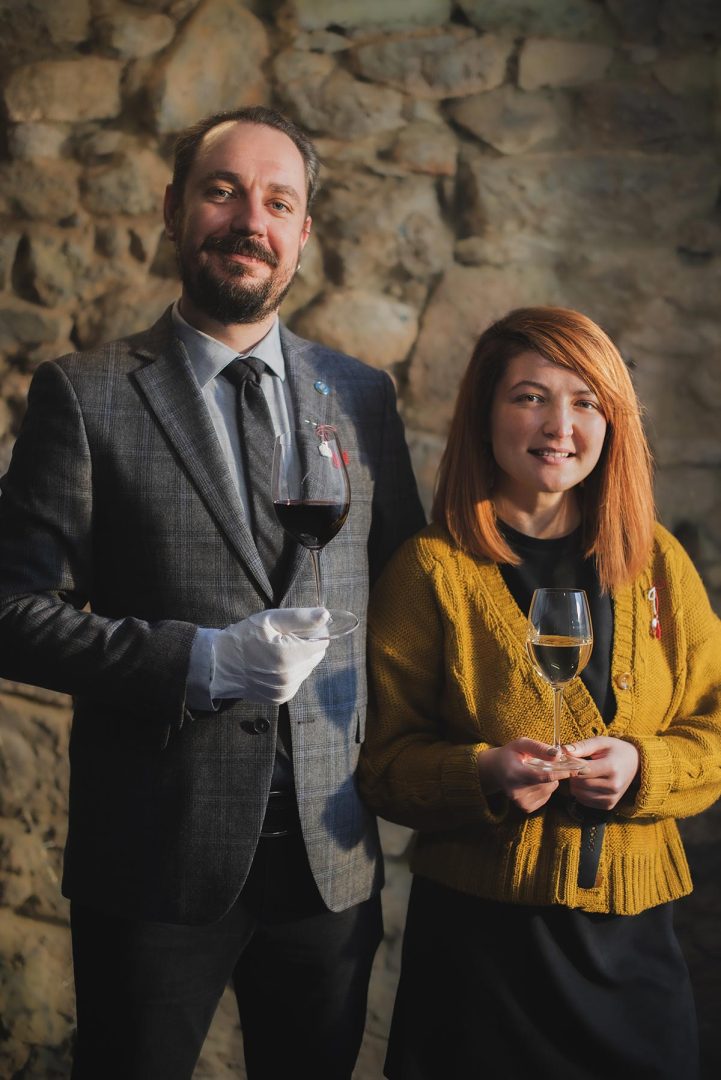 Sommeliers at "Plin cu Vin" tasting room, where they offer to guests a large selection of white and red wines.

Maxim: The Mărțișor is something related to the place where I was born. A custom specific to only this territory. When gifting a Mărțișor, I feel like receiving an endorphin injection, I feel warmth.

Dana: It’s one of the little customs I’ve respected since I left home, a reminder of my family and where I come from. Gifting a Mărțișor is my way of saying thank you for being by my side! When I receive it, I feel like I matter to someone. It is very important for me to charge the Mărțișor with my energy for the whole month of March, and then tie it to a fruit tree.

Maxim: In the world of wine, sparkling wine is the Mărțișor, it is the only one that allows the mixing of white and red grape varieties.

Dana: For me, the Mărțișor is white wine made from red grape varieties.

In March we invite you to Moldova!

In March we pin a Mărțișor close to your heart and ask you to spread the spring. If you can’t visit us, you can make your own Mărțișor at home. Just don’t forget to tie it to the twig of a fruit tree at the end of the month so that the ritual can be fulfilled.